Ensuring that New Hampshire’s 19 designated rivers have enough water for both people and aquatic life.

The Instream Flow Program ensures that rivers continue to flow in spite of the uses and stresses that people put on them. Under natural conditions, rivers flow freely with source waters coming from precipitation via lakes, ponds, wetlands, small streams and groundwater. Under human influences, however, river dynamics can change drastically. People frequently withdraw large amounts of water for drinking and irrigation directly from rivers, as well as from the sources that supply the rivers, particularly lakes and groundwater. Land use changes can result in faster runoff and changes to the stream structure. Many rivers have dams that restrict the amount and timing of water flowing downstream. In addition, the loss of wetlands to land development reduces the amount of water that would normally augment rivers during dry periods. These changes in stream flow can impair river habitat.

The program determines the seasonal flows necessary to support both natural aquatic habitats and human uses and then works with water users and dam owners to ensure that their water needs are met while maintaining the protected flows during periods of unusually low flow, even during droughts.

Currently, two rivers, the Lamprey and Souhegan rivers, are actively managed under the Instream Flow Program. In addition, protected instream flows are being developed for the Cold River, and will soon be under way for the Warner River. 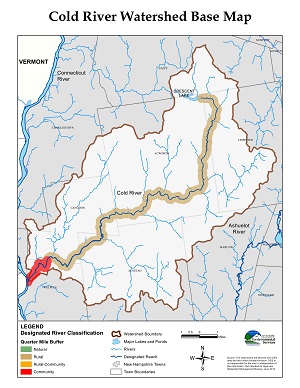 Learn more about the Cold River

The instream flow pilot study was completed in 2015 on the Lamprey and Souhegan rivers. The Report of the Instream Flow Pilot Program summarizes how the protected instream flows and water management plans were developed for each river, and makes recommendations for applying instream flow management on other New Hampshire rivers designated under the Rivers Management and Protection Program.

The upper Ashuelot, Cold and Warner rivers were identified on the 2018 Priority List for future protected instream flow studies. With studies now under way for all three of these rivers, the time has come to identify the next priority rivers for implementation of the Instream Flow Program. A proposed 2021 Priority List of the next rivers to be studied has been developed, using the following four criteria:

The priority ranking process has identified three additional rivers as priorities for studies: the lower Ashuelot, Isinglass and Pemigewasset Rivers. During Winter 2021, NHDES will work with stakeholders and the public to confirm these as the next rivers as priorities for protected instream flow studies. This process will include a public hearing in order to receive comments from the public. Please watch this webpage for further details regarding the public hearing, and feel free to contact us if you have an opinion regarding rivers that you believe should be a priority for instream flow protection.

The Instream Flow Program requires at least 30 years of historical stream flow data, but this is not available for every river. Flows can be estimated by comparing nearby gaged rivers and adjusting for watershed area and geography.

Learn how the process was developed

All of the New Hampshire Instream Flow Program documents available online can be found here. If you still do not see what you are searching for, contact us for more information.