Determining the frequency and extent of harmful organisms and associated biotoxin production in fresh and marine waters. 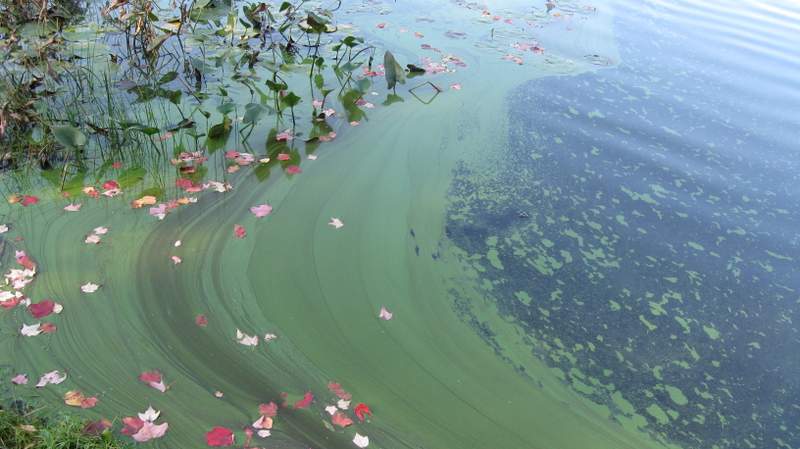 Cyanobacteria blooms are aesthetically displeasing in sight, odor and taste, as well as potentially toxic to domestic animals, livestock, wildlife and humans.

Cyanobacteria are a potential public health danger because they may produce toxins, collectively referred to as “cyanotoxins,” that can be consumed by organisms in the food chain and released into the water when cells die. However, the amount and type of toxin produced varies over time and from lake to lake. A cyanobacterial bloom may produce very little to no toxin in one lake, and a later bloom in the same lake could produce a large toxin concentration. 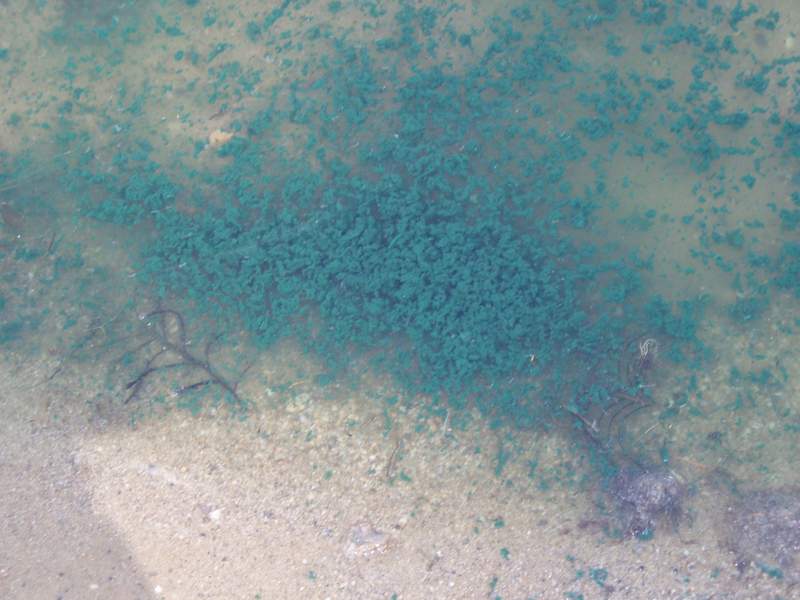 Cyanotoxins can cause both acute and chronic illnesses, as these toxins target the liver, kidney and central nervous system, and can irritate the skin. Acute effects, such as skin and mucous membrane irritations, can occur after short-term exposure with water containing cyanotoxins. Chronic effects, such as liver, kidney and central nervous system damage, can occur over a long period of time from ingesting water containing toxins. 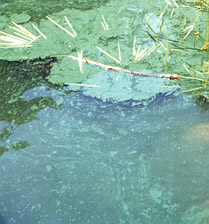 If you suspect a waterbody is experiencing a cyanobacterial bloom, call or text the hotline at (603) 848-8094 or email HAB@des.nh.gov and follow these steps to minimize immediate risks:

If you or someone in your family (including pets) becomes ill or develops a rash after recreating at one of New Hampshire’s surface waters, you should first consult with your doctor. You can then submit a detailed report to help us track waterborne-related illnesses. 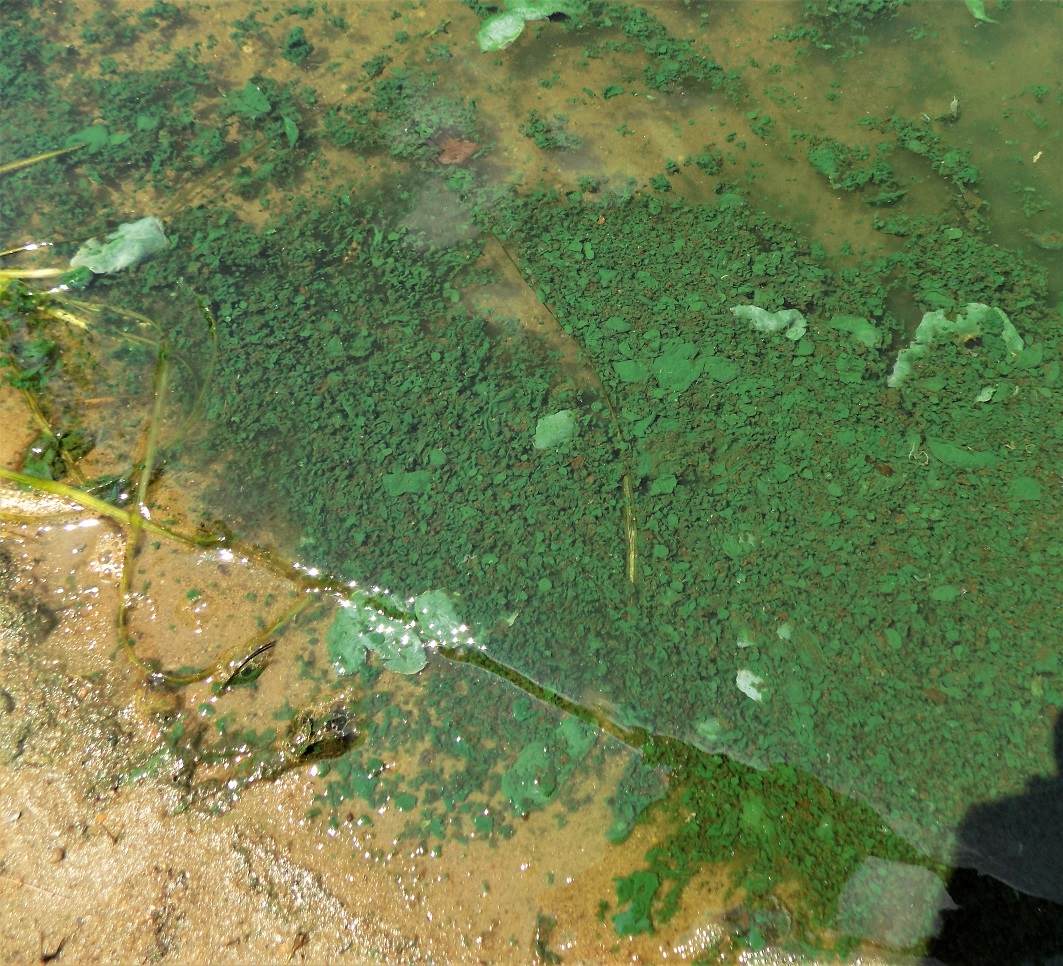 In response to the growing concern about cyanobacteria as a threat to public health and an increase in reported bloom occurrences in New Hampshire waterbodies, NHDES now offers grants to help public water systems implement programs to monitor for potentially harmful cyanobacterial blooms. Additionally, NHDES’ CyanoHAB Response Protocol for Public Water Supplies provides guidance regarding how to respond should a bloom occur within a surface waterbody used as a source of drinking water.

If your favorite pond or lake turns green, or you see what looks like a blue-green paint spill, you can take a photo and text it to the NHDES Cyanobacteria Hotline at (603) 848-8094 or email HAB@des.nh.gov.

When fecal bacteria or cyanobacteria counts at designated public beaches are higher than the state standards, an advisory is issued, approximately 24 hours after sampling. Detailed sampling results are also available through the OneStop database.

Check out our interactive maps!

NHDES has developed a number of online mapping tools to help you find water quality data and information. There are three primary tools: the assessment mapper, the lake information mapper and the coastal atlas. 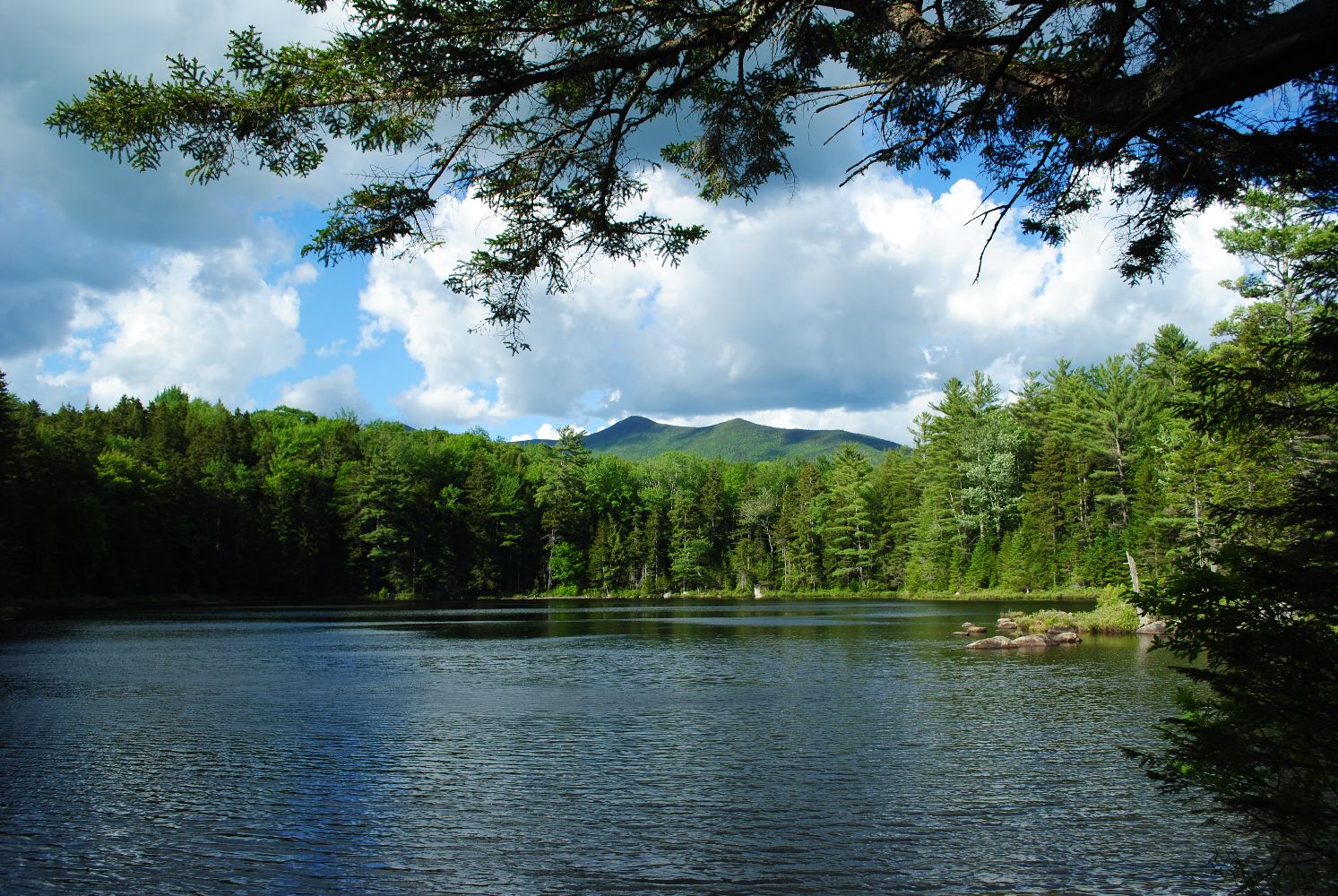 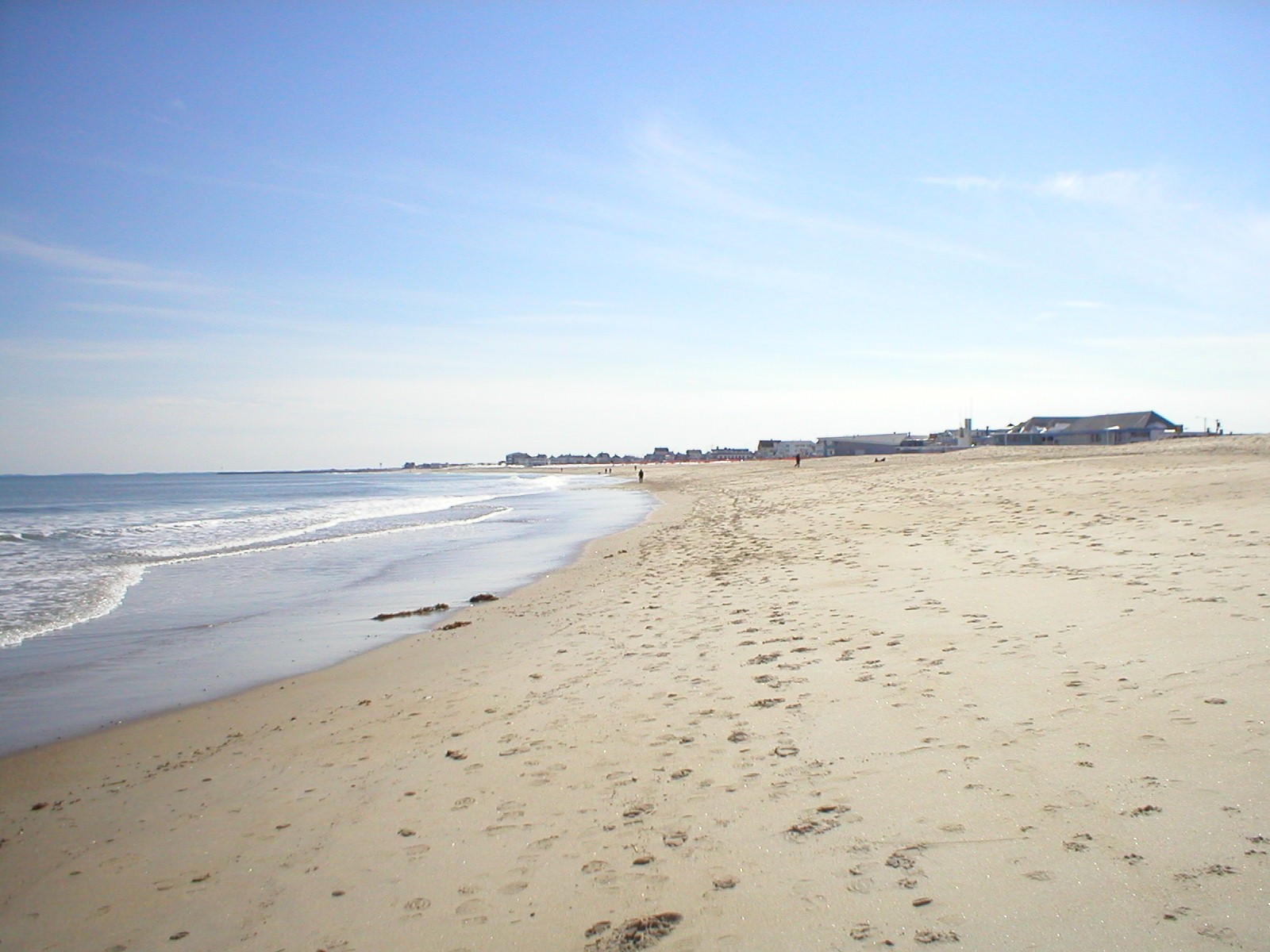 The Coastal Atlas is a tool to show information on shellfish bed closures, beach advisories and coastal public access in an easy-to-use format. 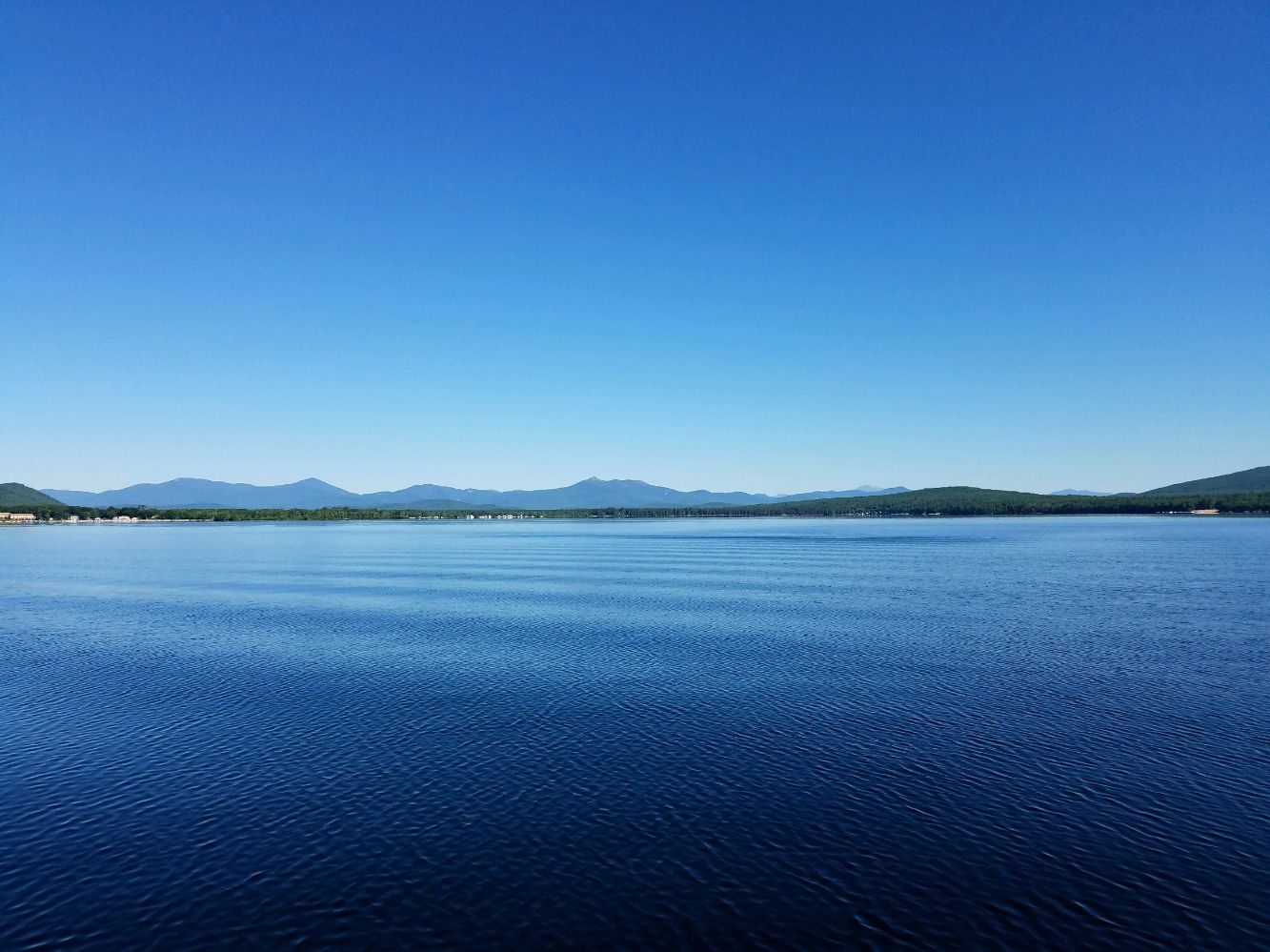 Tweets from NHDES
VIEW ALL TWEETS

How can you help? The Cyanobacteria Monitoring Collaborative is a coordinated monitoring effort to engage citizens in locating and understanding harmful cyanobacterial blooms.