Providing guidance on fish consumption and its health effects and monitoring levels of mercury in fish tissue. 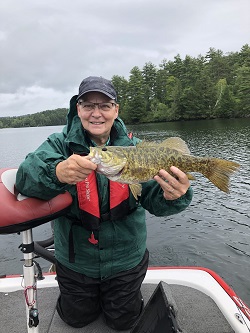 Fish and shellfish are an important part of a healthy diet. They are a good source of low-fat protein and contain nutrients like omega-3 fatty acids, a key nutrient for brain development. There are potential health risks in consuming fish with elevated levels of mercury, however. These include impacts to the neurological system of unborn and young children, and an increased risk of kidney failure, heart attack and compromised immune system in adults. As a result, the state of New Hampshire has a statewide fish consumption advisory that specifies the recommended amounts that are safe to eat as well as certain species and waterbodies that are known to have higher mercury levels. Mercury is a persistent, bioaccumulative, toxic pollutant. When released into the environment, it accumulates in sediments at the bottom of waterbodies where it converts into toxic methylmercury and enters the food chain. Due to decades of mercury deposition, mercury contamination in freshwater fish is widespread and significant enough to warrant fish consumption advisories in all 50 states.

Learn more about “Mercury: Sources, Transport, Deposition, and Impacts” and “Mercury in the Environment.”

NHDES continues to monitor mercury levels in fish tissues. In 2018, NHDES published a report analyzing the mercury content in 26 freshwater fish species from over 200 New Hampshire waterbodies from 1992-2016. The report evaluates human health risks, trends over time, and geographic patterns of mercury in fish tissue. For more information, read the Mercury in Fish Tissue Full Report. NHDES also provides a summary of the report.

Current state law prohibits the use of lead sinkers and jigs with a total weight of 1 ounce or less in all fresh water to protect Common Loons and other waterbirds.

Interested in the mercury content in fish tissue from a particular waterbody? This map provides simple tables of these data where available.