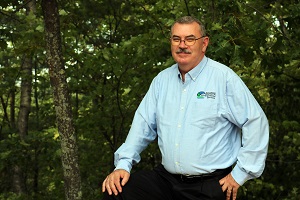 Commissioner Robert R. Scott has served as the NHDES Commissioner since June 2017. Commissioner Scott previously worked for NHDES for 17 years in the Air Resources Division; as Director of the division from 2003 to 2012. Between 2012 and 2017, Bob served as Commissioner at the NH Public Utilities Commission.

Commissioner Scott started his career as an engineer in private industry, a position he held from 1990 to 1995, and as a munitions and aircraft maintenance officer in the US Air Force from 1986 to 1990. In 2016 he retired as a cyberspace operations officer with the Air National Guard after 30 years of military service, having commanded three Air Force squadrons in his career. Scott has a Bachelor of Science degree in mechanical engineering from Lehigh University.

In addition to his duties as NHDES Commissioner, Bob serves as cybersecurity advisor for critical infrastructure to Governor Sununu. He also currently serves on the Board of Directors of the Regional Greenhouse Gas Initiative Inc. (RGGI) and as Vice Chair of the Site Evaluation Committee.

Over the course of his career, Commissioner Scott has worked closely with diverse stakeholders in addressing many of the major public health, environmental, and infrastructure challenges facing the State; such as, the extensive work the Department has done in the area of PFAS contamination, the implementation of the Drinking Water and Groundwater Trust Fund, and continuing work on program process improvements.

Mark Sanborn was confirmed as Assistant Commissioner of NHDES on August 18, 2021. He most recently served as the Governor’s Energy Advisor at the newly-established New Hampshire Department of Energy (previously, the New Hampshire Office of Strategic Initiatives). He also previously worked as Federal Liaison for the state Department of Transportation.

Mark’s other professional experiences include Director of Government Relations for Concord Coach Lines, and during the Administration of President George W. Bush, served as Counselor to the Assistant Secretary for Transportation Policy at USDOT and as Confidential Assistant for Rural Business-Cooperatives Services at USDA. Mark began his public service career in New Hampshire congressional offices as a staff member for former US Senator Bob Smith and former US Congressman Charlie Bass.

Mark is a graduate of the University of New Hampshire where he received a Bachelor of Arts degree in political science with minors in history and philosophy.

Craig has served as the director of the NHDES Air Resources Division since September 2013. Craig has worked in the field of air pollution control at the department for over 30 years. The Air Resources Division regulates air pollution from industrial and electric generating facilities, monitors air quality across the state and conducts programs to reduce air emissions from other source categories, such as motor vehicles, to ensure that New Hampshire meets federal Clean Air Act standards. Craig holds a B.S. degree in Chemical Engineering from the University of New Hampshire.

Mike has over 30 years of experience with NHDES, including hazardous waste (RCRA) compliance and enforcement, emergency response/incident management, and waste site cleanup and redevelopment. He served as NHDES’ brownfields program manager from 2000-2007, and has served as director of the Waste Management Division since 2007. As director, Mike is responsible for solid and hazardous waste management, petroleum tanks compliance, hazardous materials/emergency response, state and federal waste site cleanup, NHDES’ emerging contaminant remediation program, and administration of the Drinking Water and Groundwater Trust Fund. He holds a B.S. in Chemistry from the State University of New York at Syracuse, and an M.S. in Civil Engineering from the University of New Hampshire.

On January 12, 2022, Governor Sununu appointed Rene Pelletier as the Director of the Water Division. Rene has 48 years of experience with NHDES. Rene has worked in all water-related programs at NHDES and its predecessor, the Water Supply and Pollution Control Commission (1973 to 1987) during his career. For the past 10 years, Rene has been serving as the Assistant Director of the Water Division. Prior to that position, he managed many of the individual programs within the Division Throughout his career, he has provided program oversight and assisted program implementation in multiple programs/bureaus within the Water Division. These programs include Subsurface Systems, Alteration of Terrain, Drinking Water and Groundwater, Wetlands Bureau, Dam Bureau, Wastewater Engineering, Watershed Management and the Winnipesaukee River Basin Program. Rene holds an M.S.in Civil Engineering from the University of New Hampshire.