It’s summer and it’s hot! So where is the ozone?

New Hampshire residents have learned that when summer’s hot and humid weather arrives, an Air Quality Action Day (AQAD) for ozone, might be issued by NHDES. And this year, a very hot and humid summer, no AQADs have been issued to date. What makes this year different? 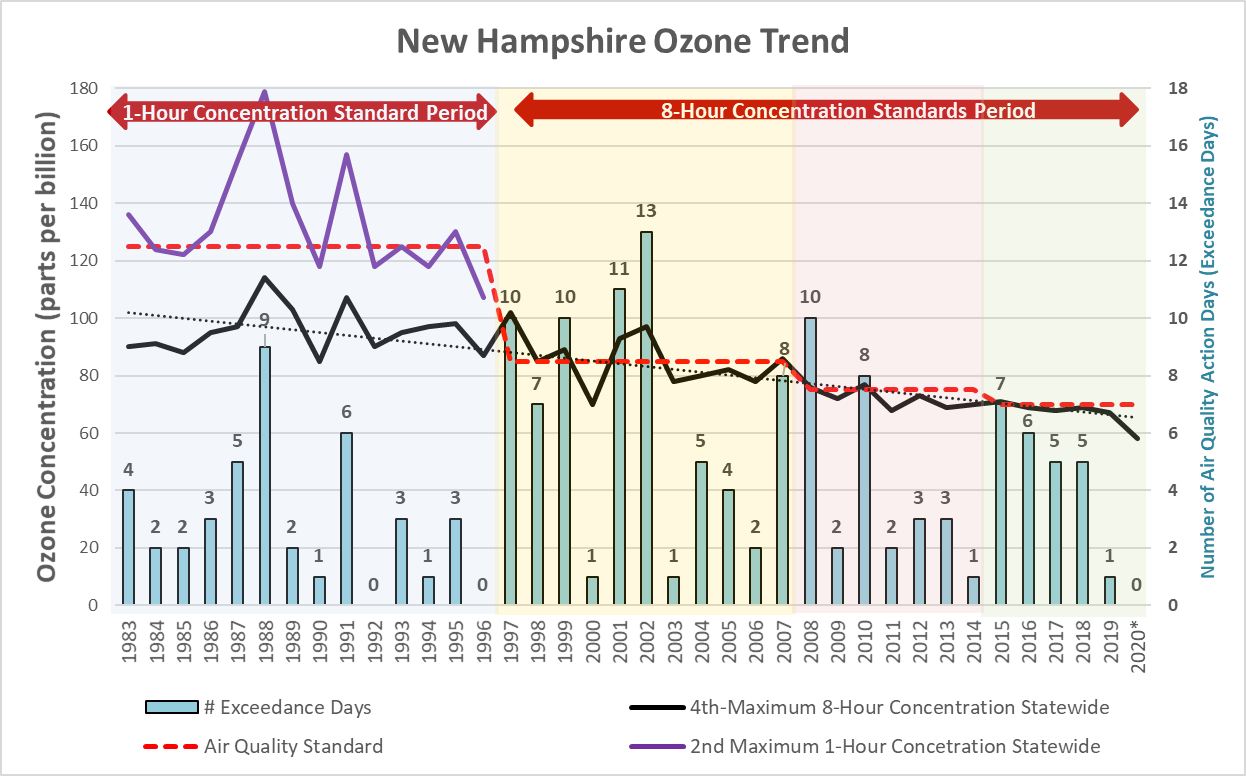 The air is cleaner because air agencies, industry, and others have worked for decades to lower emissions from vehicles, power plants, industry, and other human activities that emit nitrogen oxides or volatile organic compounds, the chemical ingredients needed to produce ozone. Ozone-producing emissions in New Hampshire are down by about 70% from 1990 levels and ozone itself is down by about 30%.

Although ozone has decreased, AQADs have been issued because the National Ambient Air Quality Standards (NAAQS) have changed. The NAAQS for criteria pollutants, including ozone, are reviewed by EPA every five years in consideration of the most current health studies. The ozone NAAQS has been revised to more stringent levels three times since it was first established in 1979. Therefore, even though ozone concentrations are lower, AQADs have still been issued because of the lowering standard. The chart below shows how the NAAQS and ozone concentrations in New Hampshire have changed. The black line tracks the annual maximum 4th highest ozone concentration among all monitors in the state from 1983 to 2020. The ozone NAAQS were made more stringent in 1997, 2008, and 2015, each shown in different background colors. The number of exceedance days reflect the standard that was in place during each time period. Note that the ozone NAAQS for 1996 and earlier was based on a 1-hour averaging period. Since 1997, the NAAQS has been based on an 8-hour averaging period.

The COVID-19 pandemic may also be an influence on ozone levels this summer. Emissions from cars dropped by nearly 50% when we started working from home in March. This has recovered to within 20% of normal, but lower emissions throughout the region and across the country have resulted in lower nitrogen oxide concentrations and has nudged ozone levels downward, even if only temporarily.

In summary, ozone forming emissions are down significantly and there is less ozone in New Hampshire’s air. However, we still experience Air Quality Actions Days because health standards have become more protective. The COVID-19 pandemic may have contributed to some reductions in emissions, but it is difficult to say how much it was truly responsible for the lower ozone and lack of AQADs this summer. Whatever the case may be, NHDES staff and air quality scientists from across the country and the world, will be studying the summer of 2020 for a long time to come.